We’ve been given these rather fantastic photographs taken behind the scenes of the Series 8 serial ‘Band Of Slaves’ – one of the infamous Piggy Malone & Charley Farley stories.

Paul Rushworth – who has kindly given us permission to use them – explains; ‘back in the late 1980’s my parents worked as magicians on cruise ships… I drove them down to Southampton to join the Canberra… my eyes lit up when I saw all the film wagons and cameras on the quayside… they were filming the Ronnies in a ‘Piggy Malone & Charlie Farley episode…’

‘Band Of Slaves’ sees our bumbling heroes trying to discover who or why an orchestra keeps losing its all-female members. A large part of the filming took place during the 1981 summer cruise on board P&O’s cruise ship ‘Canberra.’ Unusually for a TV show at the time, the Ronnies actually stayed on board for much of the cruise and filming took place in several of the countries en route.

Paul goes on to tell us: ‘when the cruise got underway, and they weren’t filming.. Ronnie Barker held court with the comedians on board, bisected their acts… they had absolute respect for him and hung on his every word.’

The photographs Paul has shown us actually depict filming from Part 6 of the serial. They show Paul’s mother – now being utilised as an extra – on the runway at Madeira airport. 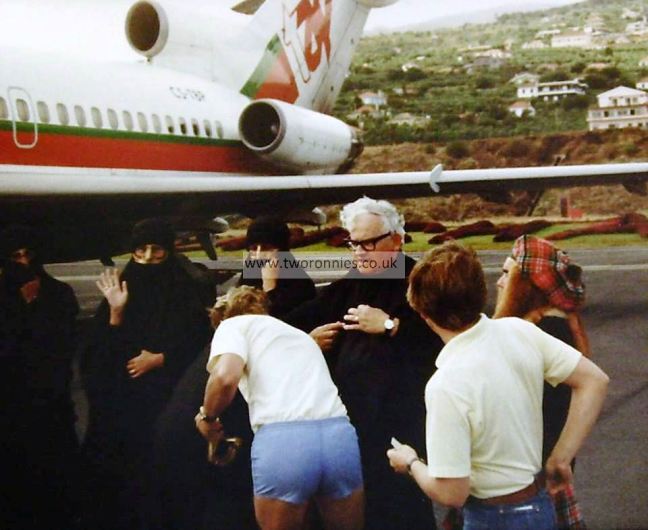 (Ronnie B and his flock of white hair during a break in filming. Paul’s mother can be seen waving to the camera (left). Ronnie C can just be spotted to the right)

During the scene, Ronnie C & B (or Piggy Malone & Charley Farley) are dressed in disguise, following the ‘Band Of Slaves,’ on board an aeroplane.

(the scene as it unfolds in the sixth installment of ‘Band Of Slaves.’)

(similar costumes can be seen earlier in the serial being worn by kidnapped band members. Presumably these are all different actresses than were used in the airport scene)

However, Paul also has a very entertaining story about the filming of an earlier scene. He tells us: ‘I went on board and watched as they filmed a bar scene… my dads mother was a very strict Plymouth Brethren, and not only would she hate magic and magicians, she didn’t like to see women showing their legs or bosoms… you need to know this before the following scene…

BAR SCENE.
looking at the bar, Ronnie Barker was on the left, a big bossomed lady with a split skirt was in the middle, and my dad was sitting next to her on the right… she was eating peanuts and between each take someone would offer a bucket for her to spit out the peanuts…
Ronnie was talking to her… “Do you want a drink then”?
lady… “Yes I’ll have a screwdriver”
Ronnie looks at her legs and says “A screwdriver? … Why are they false”?
(she then whips open her skirt and says… ) “Do these look false”?
there is then a big closeup of my dad looking at her legs with his mouth open!
Well, when this was broadcast, my Grandmother had everyone ringing her up saying they had just seen her Geoffrey looking at a woman’s legs on the TV!’

(caught out! Paul’s father gets his close up)
Paul is actually a Comedy Magician himself and his details can be found via his website www.paulraymagic.co.uk