The ORIGINAL handwritten script by Ronnie Barker for the infamous ‘Fork Handles’ sketch is up for auction. Here is the official press release:

‘An iconic piece of British Comedy history is going under the hammer at East Bristol Auctions in Hanham, Bristol. Ronnie Barker’s original handwritten script for the infamous ‘Fork Handles’ sketch has been consigned to their June 1st ‘TV, Film & Entertainment Memorabilia’ Auction.

The script – written solely in Barker’s hand – covers just four pages, and features Barker’s original title for the sketch ‘Annie Finkhouse’ (Anything Else?). The script first came to light during an episode of the Antiques Roadshow in 2006, and sold a year later to an anonymous collector for £48,500. The script comes with several articles of provenance, the most special of which comes direct from the late Ronnie Corbett – the other Ronnie of ‘The Two Ronnies.’ 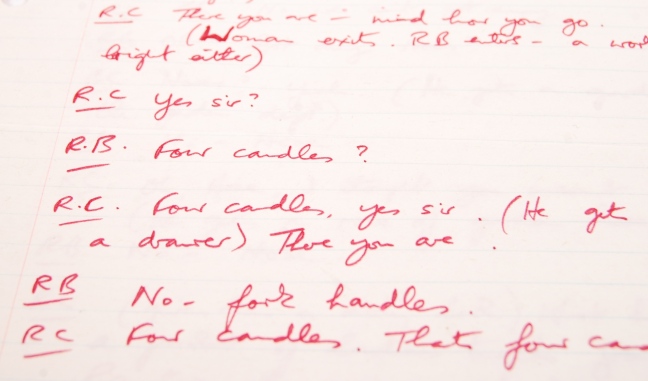 Auctioneer Andrew Stowe describes the script as ‘one of the most thrilling items we’ve ever had. It’s an absolute icon of British Comedy. When it first came in to us, I was shaking with delight. ‘Fork Handles’ is a huge part of the British psyche – and this script was its birth. It’s a ‘holy grail’ for collectors.’

First televised in 1976 the sketch shows Barker entering a hardware shop and appearing to ask for ‘four candles.’ Ronnie Corbett – the manager of the hardware shop – goes to collect ‘fork handles.’ And so it continues. The sketch is classic example of Ronnie Barker’s use of word play and double-meanings. 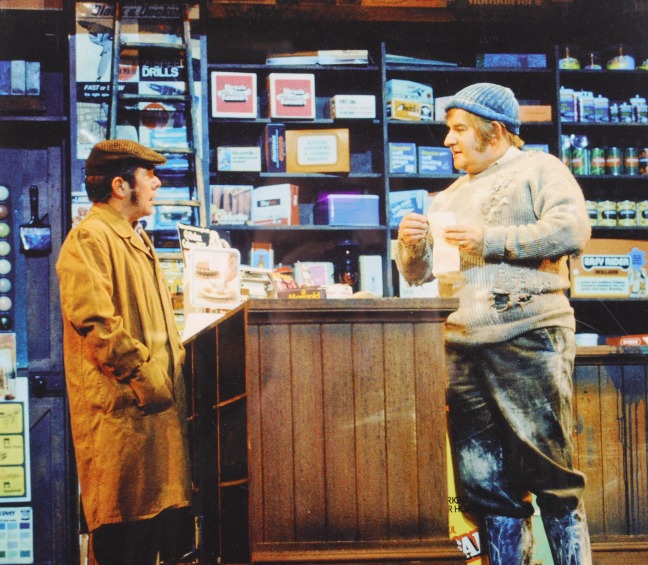 Barker, who was famously very shy, would often donate items to local charity auctions and raffles during the seventies and eighties. It is presumed that this is how it came to be in public hands.

‘Barker famously used a pseudonym to write his sketches,’ adds Andrew ‘and this one is no different. It’s author being one ‘G. Wiley,’ – Barker’s most famous alter ego. We can only presume that this handwritten copy is Barker’s own final draft of the sketch – sent to his agent for typing and printing, and then returned to Barker. By using this system, Barker was able to remain anonymous for many years.’

The script, along with other effects, feature in East Bristol Auction’s June 1st specialist auction. The catalogue can be viewed via their website: http://www.eastbristol.co.uk ‘

You can view the actual lot right HERE

We’ll keep you updated with how much it sells for!