We continue our look at some of the filming locations used in the serial ‘The Worm That Turned.’ This time we’re somewhere very special – Berkeley Castle.

Much of the serial was filmed in the Berkeley / Dursley / Purton area. Berkeley Castle was used extensively throughout the episodes, but largely in Ep. 4 & 5 – as Ronnie B & Ronnie C plan their escape from ‘Barbara Castle.’

Given the historic nature of the castle, I was awestruck as to how much of the location remains completely unchanged from when the Ronnie’s filmed there. As you’ll see from the Then/Now shots below – the entire location (including many of the decorative elements) remains exactly as it was in the show.

Many of the scenes were filmed in the central ‘Inner Ward’ or courtyard of the castle. Visiting the location, it’s rather impressive to see how the BBC filmed scenes from different angles, giving the impression that ‘Barbara Castle’ was much larger than it actually is. Nearly every corner of the courtyard was used in some way.

Some inner rooms were used, including the Kitchen. Rather amusingly, in the shot of the Ronnie’s walking past the sinks, they are infact, walking from nowhere! Many of the locations are not sequential to each other, despite how they look in the episodes. Clever BBC trickery was employed to edit them altogether as one ‘journey’ through the castle.

(The entrance to Berkeley Castle – note the canons still in place) 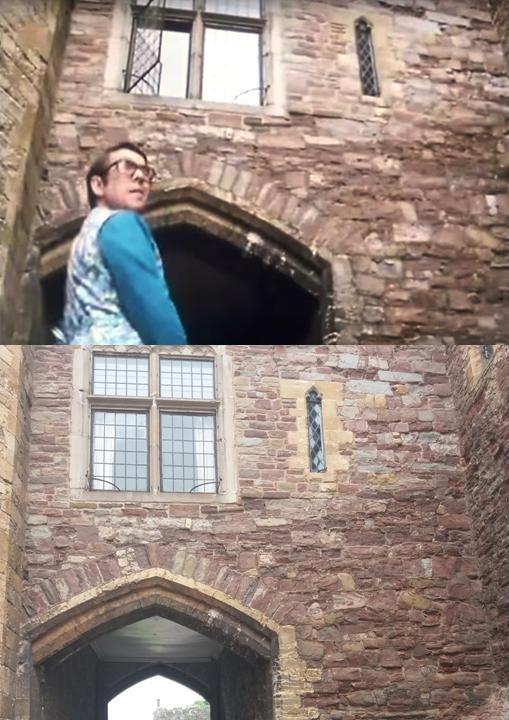 (now INSIDE the courtyard, Ronnie C exits the car) 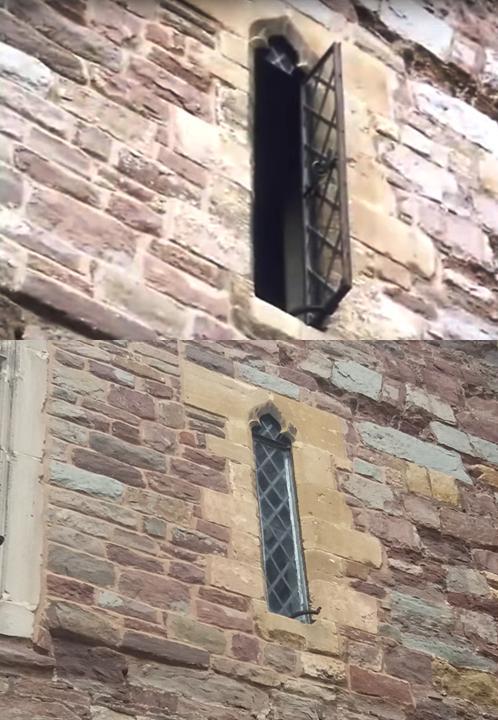 (The window in which Ronnie C throws his pass. Note how every stone is still present and unchanged since filming)

(As Ronnie B hides, its possible to match up his exact location using the stones. This is just beneath the aforementioned window) 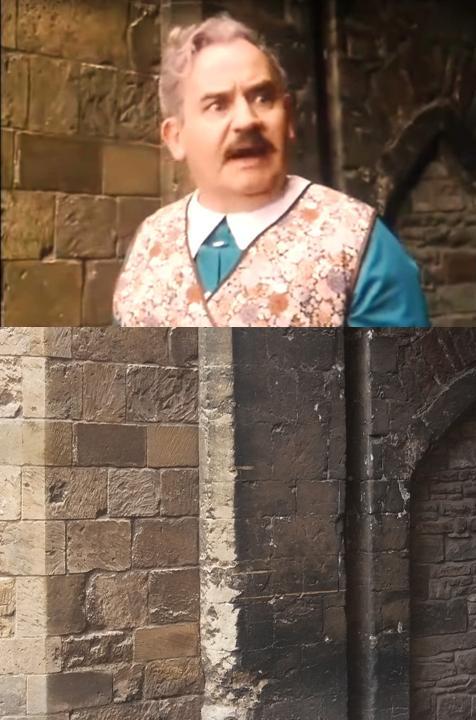 (Same scene, but from a different angle)

(Under the window again. Rather amusingly, this exact spot appears much larger in the show than in real life. In real life, it’s rather a tight squeeze, and somewhere nobody would ever choose to stand!) 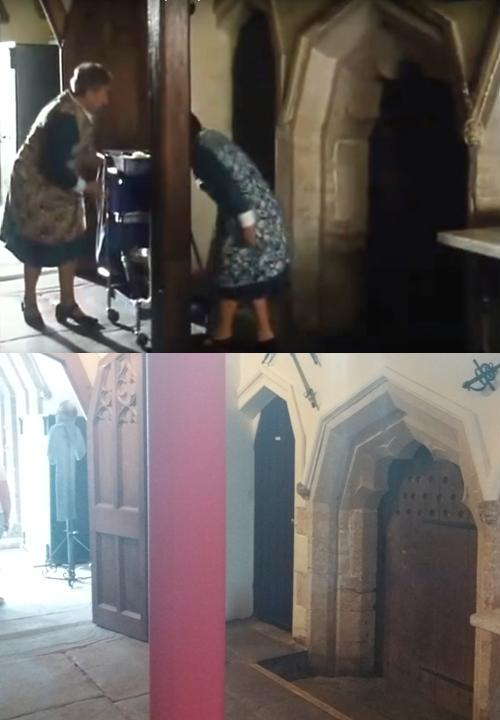 (Just off the courtyard, outside the Main Hall is this corridor. At the time of visiting, the hall was being used as a filming location so the central wooden pillar was covered in protective foam)

(Back out into the courtyard, both Ronnies walk along this entire stretch of wall – note the bricked up doorway still remains) 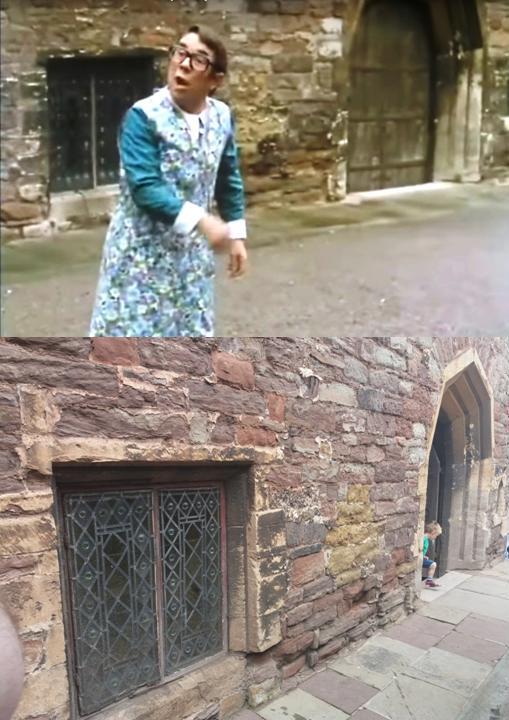 (Far side of the courtyard)

(Ronnie B stands here to extinguish the fire. I couldn’t see any sign of a tap having been fitted, so it may have been a prop put there by the BBC) 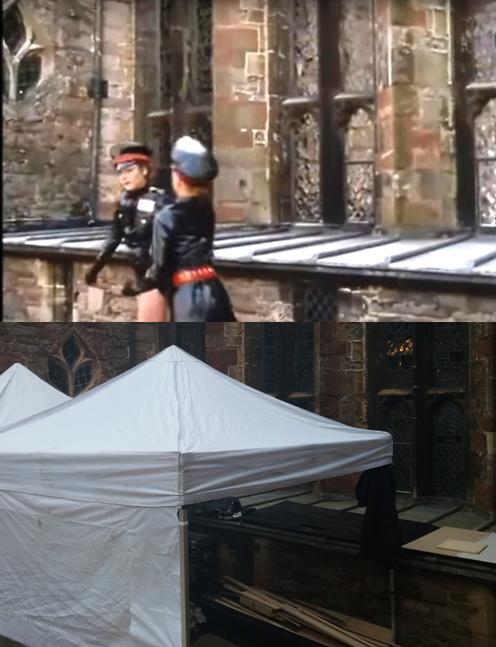 (Members of the Secret Police go running towards to commotion. NOTE: Location obscured by filming at Berkeley Castle, but you can still make out the decorative window the left hand side of the photograph.) 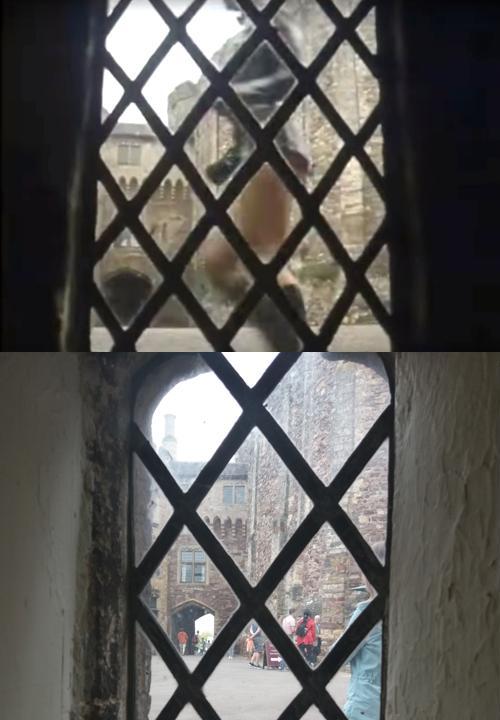 (A little tricky to find at first, but this small window is actually behind a door. I struggled to squeeze my phone in to get the shot as it’s a rather tight fit. The BBC camera must’ve been a REALLY tight fit to get the shot!)

(As the the boys make their escape, locations start becoming very disjointed. Here they are running through the castle’s medieval kitchen. Note: the plate that is just visible in the episode to the top right, is still present today)

(The staircase into the Beer Cellar was used for this shot. It’s rather out-of-the-way from the other locations, but provides a typical ‘Castle staircase’ shot for the scene)

Berkeley Castle is open to the public, and is an incredibly fascinating place. It’s not only been used by The Two Ronnies – Poldark, Miss Marple, Wolf Hall, The Canterville Ghost, Most Haunted, Father Brown and HUNDREDS of other productions. It’s a great day out for young and old, especially if the weather is nice. You can find out more about the Castle right here.