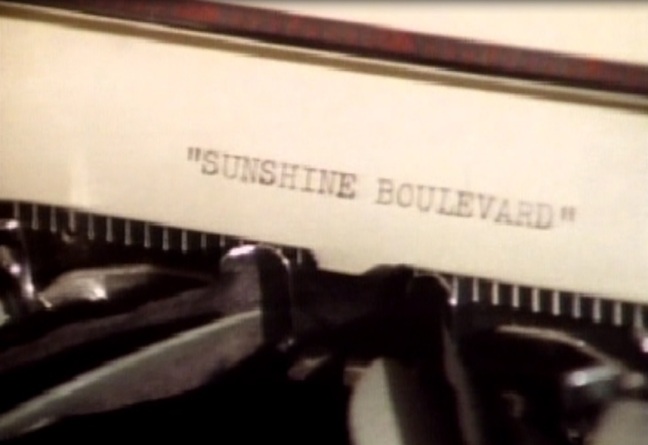 We were recently contacted by a gentleman called Vic Cheeseman. Vic supplied a 1930’s Chrysler ’77’ automobile for the sketch ‘Sunshine Boulevard’ in the first series of Series 11 (1985).

The sketch – a classic ‘Film Noir’ type scene – features Ronnie B as a 1930’s American reporter ‘Clifford Gannett’ who runs out of gas outside the home of movie star Maxton G. Mildew. Maxton asks Gannett to write an article about his upcoming movie ‘Samson & Delilah’ and after a visit to the set, Gannett discovers the leading actors to be remote-controlled robots. We won’t spoil the plot-twist – so you’ll have to watch it for yourselves, but it’s a great sketch.

Vic very kindly shared his memories of  the car, working on set that day and working alongside Ronnie Barker. He writes:

My Chrysler roadster was found in a barn in Surrey in a very sorry state needing a major restoration after a tree had evidently fallen on it crushing the rear of the bodywork. It was thought to have been a show car as it was unique in having the bonnet, wings and headlamps fabricated in polished stainless steel. A black and white picture of it at the Chrysler factory in the USA is shown in a reference book on Chrysler cars from 1904. I managed to buy the car and subsequently restore it in the early 1970’s. At that time there were few 1930 left hand drive, convertible cars in the U.K. and through contact with the American car club it was registered with was used for three film jobs requiring a period American scene. These were Philip Marlowe private eye, Kelly Montieth comedian and The Two Ronnies .

For the Two Ronnies I drove the ‘77’ on a beautiful summer morning from Iver Heath, Buckinghamshire to arrive at Rhinefield Drive in the New Forest by 8.30 a.m. It seems from what I was told many of their “skits” were filmed in this area and this one only involved Ronnie Barker so I never met Ronnie Corbett. These old cars are not easy to drive so I insisted only I would drive it on the road in filmed scenes.

The day started with the ‘77’ being loaded on to a very low trailer which was pulled by a large pickup truck with camera in the back focused on the car. Ronnie Barker came out of his artistes caravan dressed in a gabardine raincoat and trilby hat, asked me about the car then climbed in the driver’s seat and pretended to be driving whilst being pulled along on the trailer. Later a few distance shots of the car along the lane required me putting on Ronnie’s coat and hat before I drove. Ronnie looked about fifteen stone and I was about ten stone and he jokingly said to me “you’ll have to put a couple of golf balls in your cheeks!” At distance I was barely visilble but I did get an extra £40 for being ‘in shot’.

I was disconcerted when later the director wanted to film the part where Ronnie ran out of ‘gas’ and said “I wondered what else could happen to me” he kicks the front tyre and both front wheels fall off as he walks away! For this the front of the car was jacked up and the wheel nuts taken off both front wheels, the crew then tied clear nylon line to the wheels and after ‘camera roll’ two people pulled the lines to bring the wheels off and another person dropped the car down on the jack!

(The front wheels come flying off – thanks to some well hidden nylon string!)

Ronnie was great company to be with and when we stopped for lunch he sat with the crew and me and whilst eating he asked me about the car. When I told him about the barn find and its condition etc. he put on his farm yokel voice and said “I be wantin’ a lot of money for ‘er, just a li’l work she’ll be as good as nu”. He was also saying how his wife was very fond of cats which were kept at their house in Pinner.

When we finished I was thinking of what a nice day I’d had and the journey home, I completely forgot to ask what the name of the skit was or when it would be shown. I never found out until this year when I contacted The Two Ronnies Appreciation Society, I am most grateful of their help in discovering that the car is featured in Series 11 episode 1.

One final amazing stroke of luck was that several weeks later the BBC contacted me to say that an alert viewer has seen the skit (which was in black and white) and amazingly knew the history of the car! I was soon in correspondence to find out more.

A metallurgist in Sheffield discovered how to produce a malleable form of stainless steel; he subsequently decided to move to the USA where he set up a manufacturing unit. My ‘77’ had various body parts pressed in this form of stainless steel by the Chrysler factory in Detroit and was assembled as a show model for his company. Evidently in the early 1930’s there was much skulduggery by larger stainless steel organisations to take over smaller producers and in due course the manufacturing unit became almost bankrupt. Allegheny Steel Corp. bought over his company and the metallurgist moved back to Southbourne in Dorset with his family, taking the ‘77’ and a large Cadillac with him. His son became a school friend of “The Two Ronnies” viewer and had often ridden in the rumble seat (known as Dickie seat in the U.K.) of the ‘77’. 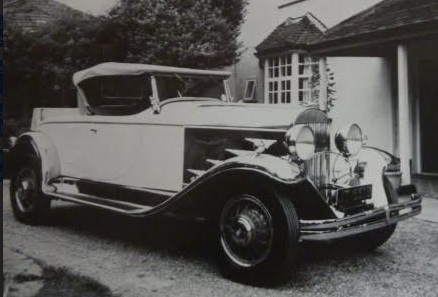 In 1985 I sadly decided I had to sell the ‘77’ as I was needing to raise money to buy a house that needed a lot of restoration. The car was auctioned at Beaulieu Motor Museum by Christies. The buyer having bought the car drove it back to his hotel in London and then shipped it back to his home in Lucerne, Switzerland.

(Ronnie Corbett, Ronnie Barker and Sandra Dickinson in the sketch)

We’re very grateful for Vic sharing his pictures and memories with us. Do you have any stories to tell? Get in touch – we’d love to hear from you.